I made this for a Bible study get together here in the Barndominium.  EVERYONE love this.  There are many variations of this and I added more topping since I felt it needed it.  I made this the night before, left out the pecans and baked it before they came at 10. 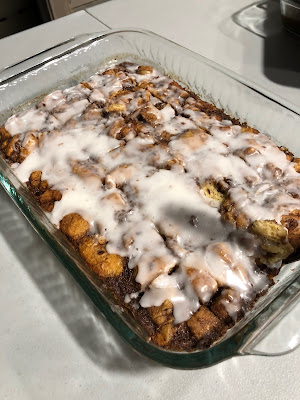 In a large glass bowl, melt butter with sugar.

Open canned cinnamon rolls, slice each cinnamon roll into fourths. Place cinnamon roll pieces into the bowl of egg mixture and toss to thoroughly coat. Then pour into a greased 9×13 casserole dish and spread out evenly.

Sprinkle with pecans, if using, and then bake on 350˚ on a low rack for 35-40 minutes or until brown