Virginia Governor Ralph Northam announced his intention to remove his state’s most prominent statue of Confederate General Robert E. Lee, which has presided regally over Richmond since 1924. On the subject of whether to topple a statue of Lee, my opinion is predictable. I grew up partly in the American South, but in a mixed-race Canadian-immigrant family to whom racist white southerners knew better than to proselytize. I therefore grew up baffled and bemused by the existence of Lee veneration, which made about as much sense as Ireland building a shrine to honor the mold that destroyed all of its potatoes. Was I missing something? Lee was a bastard. Of course the statues should come down.

Once they are down, must they go straight to the smelter? Certain charmless totalitarian ideologues have enjoyed obliterating evidence of their predecessors—think of Wahhabi grave-leveling, the denuding of churches by Protestant zealots, the erasure of enemies of Stalin. Not wanting to be like Stalin is good. Certain hemming-and-hawing, bien-pensant types have proposed that we “put them in a museum.” The problem is that museums are also sometimes sites of veneration, and in a museum Lee could retain his dignity, unless he is perhaps used as a coat rack, or put on a mechanically rocking pedestal so children can ride him if they insert a quarter (U.S. currency only, please).

[Yoni Appelbaum: Take the statues down]

In his announcement, Northam quoted Lee, who said he didn’t want any statues anyway. But why should Lee get the last word?

I would propose a lesson from postwar Germany, whose Nazi predecessors built monuments to themselves so large and ambitious that nothing short of aerial bombing could destroy them. We obliged in some cases. But one of the grandest Nazi dreams—the Nazi Party Rally Grounds in Nuremberg, site of the patriotic reverie Triumph of the Will—is still there, undisturbed. It is about five times the size of Monaco, and near downtown Nuremberg. You can visit it anytime you like.

It is not, however, lovingly maintained. There are no ticket-takers, and no guards in sight. Large portions are overgrown. Chain-link fences make it difficult to reach the central grandstand. On the structures, weeds grow up through cracks between the stones, and almost no signage notes that where you are standing, the Reichsführer and his deputies once inspected zeppelins and Hitlerjugend. You can take out your phone, find out where Hitler sat, and go spit or fart in that exact spot. No one cares. The experience of being in the presence of evil may still be emotional, but it is nothing like Dachau or Auschwitz. You could easily forget where you are, and imagine that you are in the ruins of Phoenicia or Nabataea, civilizations that would be missed only by a few archaeologists if the deserts were to swallow up their last remnants. The rally grounds are preserved not in amber but in pathos.

So too with the statues of Lee. Leave them in an open-air park, to whose upkeep Virginia can devote, say, the salary of a part-time groundskeeper and mowing equipment that only sometimes works. The mountains and hills of Virginia are beautiful places, perfect for a ghostly meadow littered with decrepit, moss-covered statuary planted in the earth at a slovenly tilt. I would not mind if neo-Confederates were permitted to visit the statues and venerate them, as long as other people could visit them and do whatever they pleased to them as well. Germany outlaws Nazi gatherings, but it seems more American to allow any and all assemblies, including pathetic jamborees of neo-Confederates, in suitably demeaning surroundings.

Or, if Virginia must honor its heritage with museum treatment, it could emulate another eerie European site—this one untainted by genocidal associations. In Copenhagen, Denmark, one of my favorite landmarks is a bronze statue, Agnete and the Merman, which is installed permanently at the bottom of one of the city’s canals. Passersby can see it under the surface if they stop to look, but most of the time no one is looking at all—and because it is submerged, it remains present but locked away in another world. The water is usually clear.

[Read: The legacy of Confederate symbols]

I have never visited Richmond’s American Civil War Museum, which opened in the district of Historic Tredegar in 2006, with the cooperation and advice of historians including David W. Blight and James M. McPherson. I see that it is next to a modest, grass-lined canal that could fit many of the statues no longer deemed tasteful to display on the oxygen side of the water’s surface. If the water is muddy, dim underwater lights could illuminate them at night, and perhaps the crown of a head could poke up at a low water mark. Again, neo-Confederates could visit and worship their riverine idols, while sunfish and other aquatic creatures dart around them and algae infest their beards.

Ridding ourselves of history is a fantasy—in this case a fantasy of absolution, as if any place could be washed free of its sins by a single act of iconoclasm. But history can be managed in more and less graceful ways. Either of these would create a public space without consecrating one—and make the statues’ final home redolent of history without stinking of it. 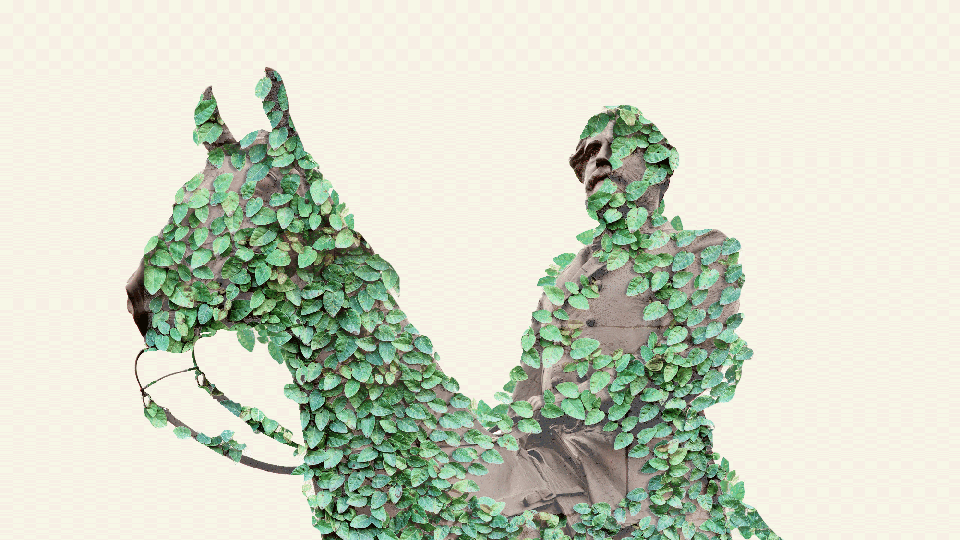