This Spicy Gluten-Free Salt and Pepper Shrimp and Squid is crispy, loaded with flavour and irresistibly delicious. Tender pieces of calamari and shrimp are dredged in a gluten-free coating, fried to perfection and tossed in chiles and garlic. If you love fried calamari or fritto misto, you’re going to fall head over heels for this delicious Cantonese-style dish.

Can You Make This Gluten-Free Shrimp and Squid Paleo?

For a Paleo version of this recipe, simply omit the Mala Spice Mix and Sichuan Chili Crisp. Instead, season the seafood with salt and pepper before and after cooking. Or, for a similar flavour profile, try adding 1 teaspoon of Chinese Five Spice powder.

Can I Use an Air Fryer?

I don’t personally own an air fryer so I haven’t tested this recipe in one. However, because the coating on the seafood is quite dry, I would imagine an air fryer could be used.

Can I Substitute Other Seafood?

Personally, I like the combination of shrimp and squid. However, you can make this recipe with all squid or all shrimp. Alternatively, you could use scallops, lobster, cuttlefish, or small pieces of white fish.

If you’re not a fan of seafood, try it with cubed pieces of pork chop, or boneless, skinless chicken breast or chicken thighs. 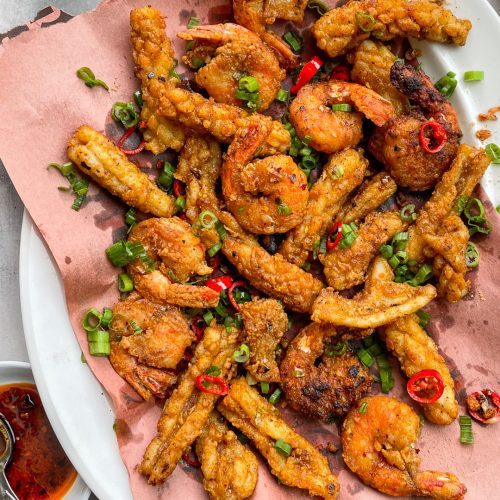