If there were ever a time to start baking homemade bread, it would be now. And you should start with this Spinach Artichoke Italian Focaccia. This ultra-light and airy classic focaccia bread is studded with chopped artichoke hearts, wilted spinach, and salty feta cheese. It’s baked until golden brown on the top and crispy on the bottom. Perfect served alongside pizza, salad, or soup! 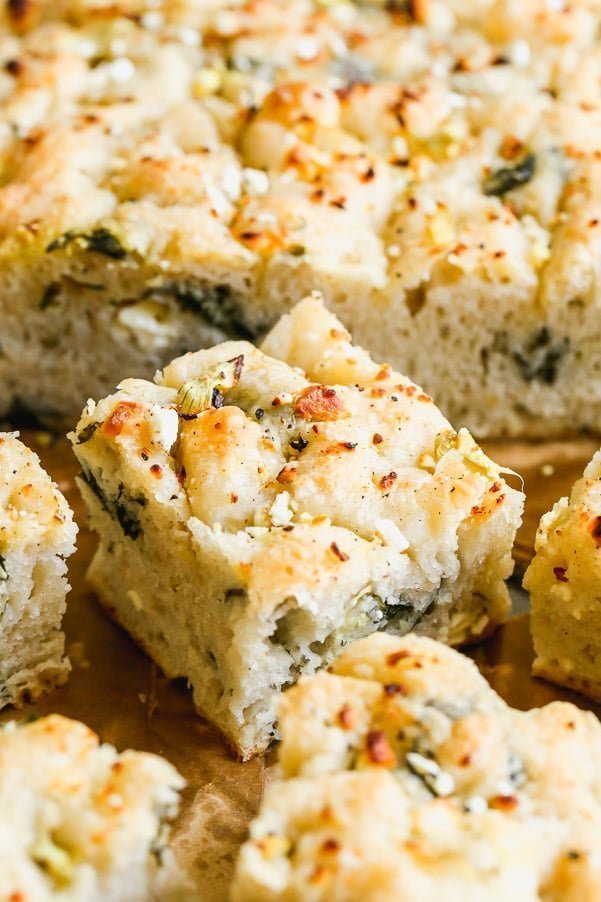 There are few things in the cooking world more satisfying than making your own bread. I’ve mastered biscuits, pretzel dough, and the no-knead bread the internet has gone crazy over for the past few years, but I still wouldn’t call myself a baker, let alone a bread-baker.

However, when I received my monthly issue of Bon Apetit last month, and they claimed to have the easiest no-knead focaccia bread on the planet, I was smitten. And of course, I had to give it a try.

It was indeed, super easy, albeit time consuming, but easy. It was soft on the inside, irresistibly crusty on the outside, with those perfect little dimples synonymous with all forms of classic focaccia bread.

I loved it so much, I felt confident enough to put my own spin on it in the form of today’s Spinach Artichoke Italian Focaccia. Our version is packed with tender pieces of artichoke hearts, lots of wilted spinach, and a handful of salty feta cheese.

While their Italian focaccia was meant to snack on and to be a vessel for sandwiches, I prefer to eat this version on its own, fresh from the oven alongside a big salad or bowl of soup.

Warning: As it looks, this makes A LOT of focaccia, which would normally be great for entertaining, but seeing as we’re not doing much of that these days, I’d bake it, and then freeze half of it when you have a hankering for homemade bread in the future. 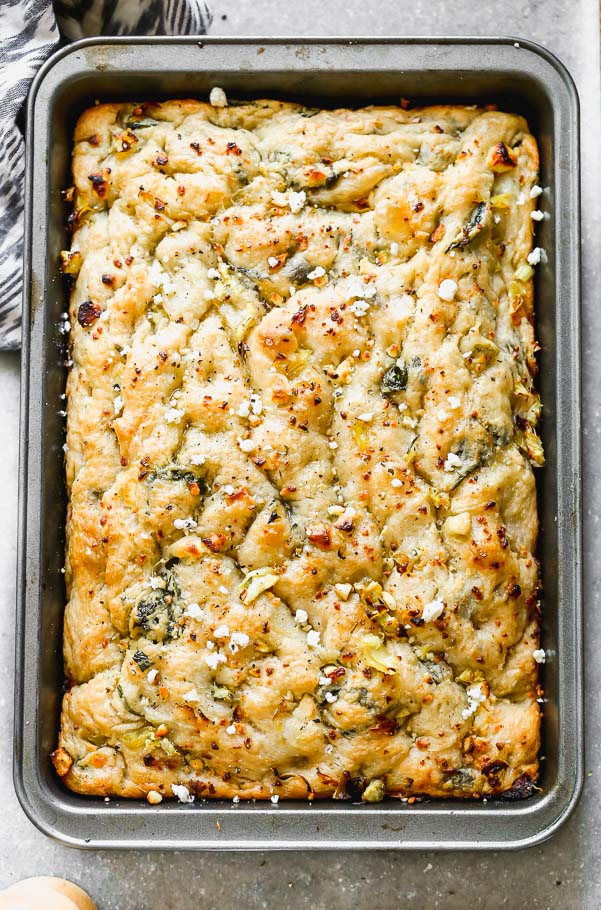 Water. As many bread recipes start, this one starts by activating the years in some warm water. Make sure it’s warm to the touch, and not hot, about 90 degrees if you’re measuring.

Yeast. While I normally use a quick-activating yeast, here you’re going to use a normal active dry years which needs to proof.

Sugar. The original recipe calls for honey, but I had just run out, sugar does the trick as well. It dissolves in the warm water, so there really isn’t a different. You could also use agave.

Flour. I love that this recipe calls for regular all-purpose flour, something all of us probably have on hand right now. 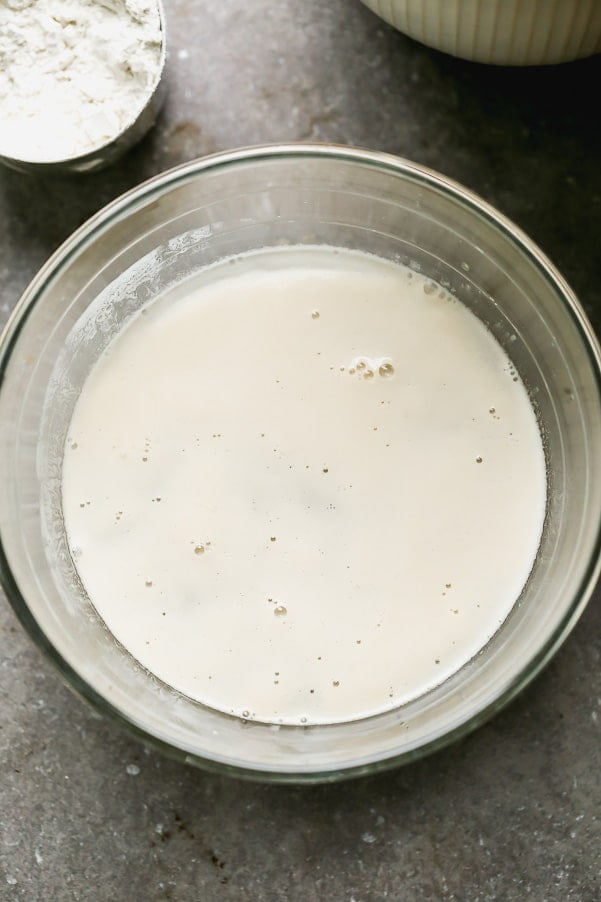 Spinach. I love the green pops of spinach, we slightly wilt it before adding it to the other ingredients.

Feta cheese. Feta adds a salty bite to the Italian focaccia I adore. If feta isn’t your thing, you could also sprinkle in some parmesan or cheddar cheese.

Salt. As mentioned before, this focaccia recipe makes A LOT, so we need a lot of salt. A whole tablespoon, and no, that’s not typo!

Olive oil. Olive oil is what gives the focaccia it’s signature crispy bottom and golden brown top. It’s a lot, but you need it. 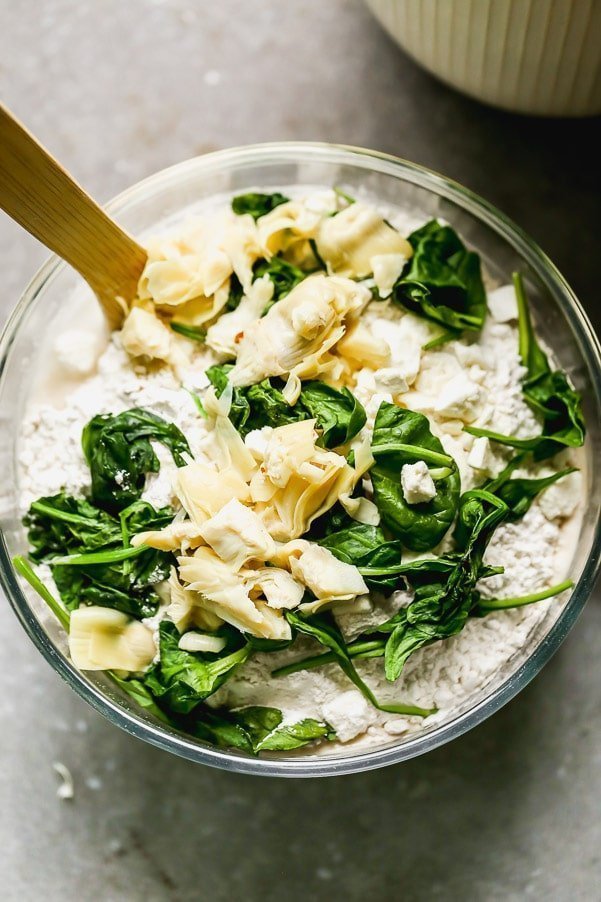 How to make Focaccia dough

Proof the yeast. Pour the warm water into a very large bowl. Sprinkle in yeast and sugar. Give it a whisk until combined. Let it sit for about five minutes until foamed and bubbly.

Wilt the spinach. While the yeast proofs, add the spinach to a small skillet. Turn the heat on medium and heat until the spinach is slightly wilted. (You want it to fold into the dough easily.)

Mix in the ingredients. Add flour, chopped artichoke hearts, wilted spinach, and feta cheese to the water, yeast and sugar. Gently fold the dough until everything is combined. The dough should look like the picture below. It will be sticky,  slightly wet, and not as sturdy as a traditional bread or pizza dough. This is normal!

Start the rising process. Gently remove the dough from the bowl and rinse it out. Dry and four tablespoons of olive oil to the bowl. Put the dough back in the bowl. Use for fingers to turn the dough so it’s completely coated in the oil. Cover with a kitchen towel and let it rise in a warm place for four hours. 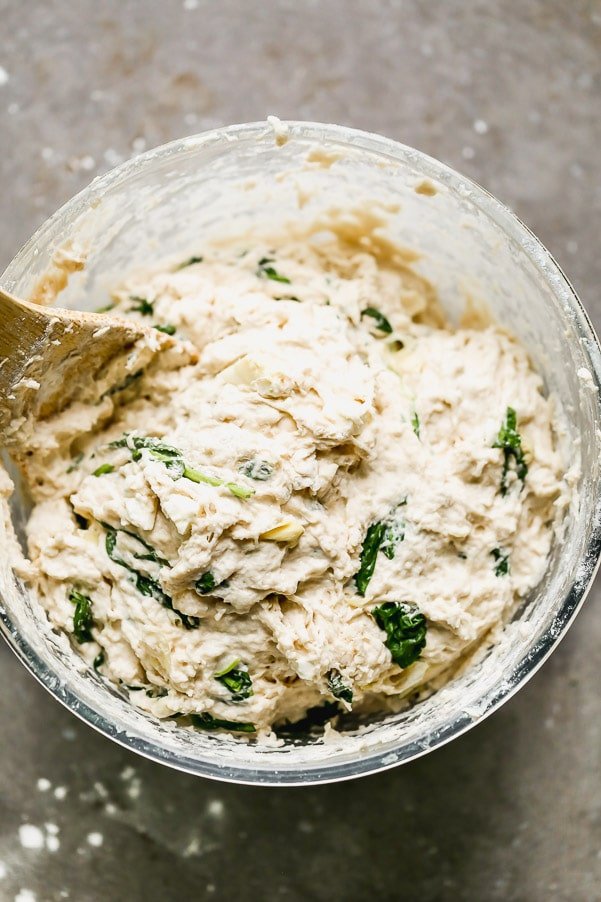 Grease your baking dish. I like to use a 9×12 non-stick metal baking pan for this. I find the focaccia doesn’t stick, and it crisps up the bottom nicely. The original recipe has you coat the bottom with softened butter, which I’ve done, but olive oil works just as nicely, plus now you don’t need any extra ingredient.

Fold the dough. This is where I don’t stray at all from the original recipe. Use two forks to pull up on the left and right side of the dough bringing it to the middle. Turn the bowl slightly and do the same thing again. Repeat two more times and form into a ball.

Transfer to baking sheet. Gently use your hands to transfer the dough to the prepared baking pan. Gently spread the dough out ever so slightly, but don’t worry about it going to the edges, it will probably do so while rising . Pour any residual oil on top. Cover again with a kitchen towel and let it rise until doubled in size, another hour or so.

Make the dimples. Once the dough has risen again, oil your hands. If the dough has not spread to the edges of the pan, use your oiled hands to do so. Next, Use your fingers to make dimples all over the dough. You don’t need to be gentle! Really get in there.  Drizzle with olive oil. Sprinkle with Maldon salt if you have it.

Bake. Place the focaccia on the middle rack in the oven. Bake for 20 minutes. Pull the dough out and sprinkle with remaining feta cheese. Bake another 10-12 minutes until golden brown and puffed. 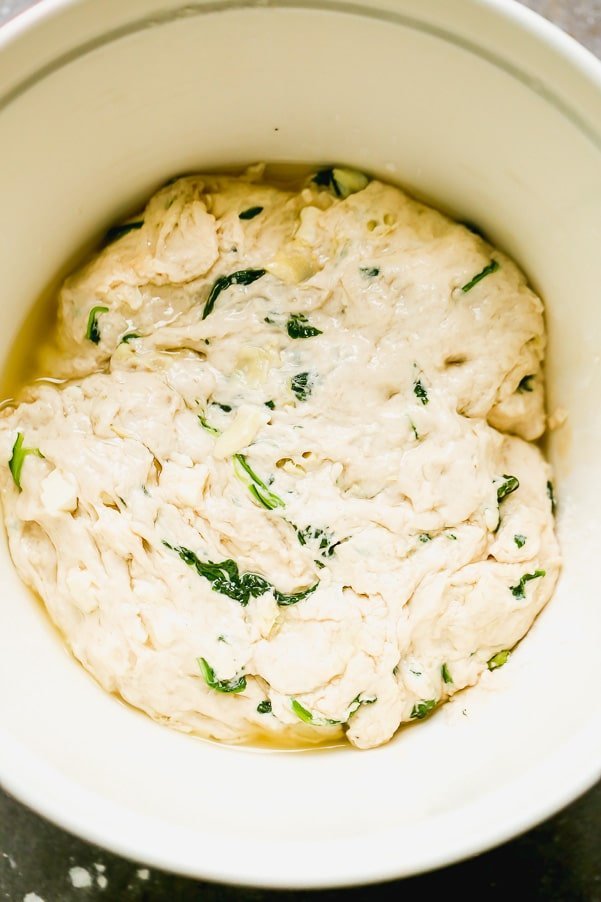 Can I use quick yeast?

Yes, even though it is quick yeast, I still let it activate for 1-2 minutes before adding the flour, artichoke hearts, spinach, and feta.

Can I use whole-wheat flour?

I have never tried this Italian focaccia with whole-wheat flour. I imagine it will work fine, but won’t have the same lovely texture you get with all purpose. I’ll work on finding out!

Can I make focaccia in a different pan?

Yes! While I haven’t, according to the original recipe, you can also bake the Italian focaccia in a 13×18 pan for a thinner, more dense focaccia bread. 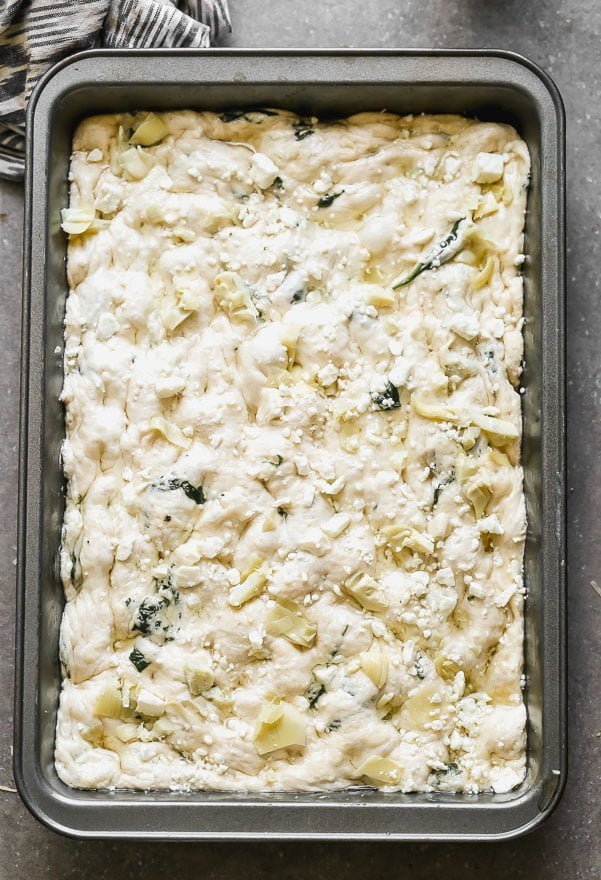 Substitutions and Tips and Tricks for Recipe Success

What to serve with Spinach Artichoke Italian Focaccia 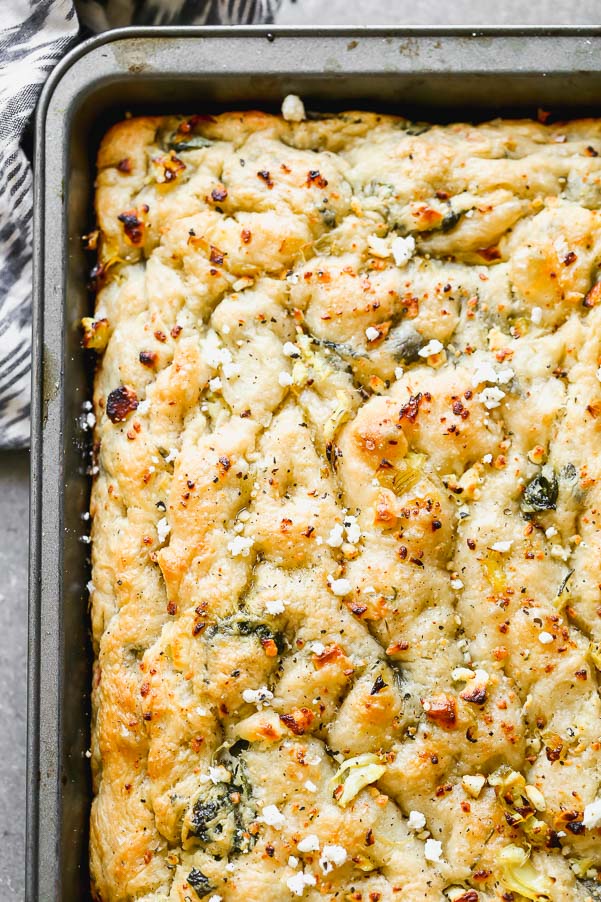 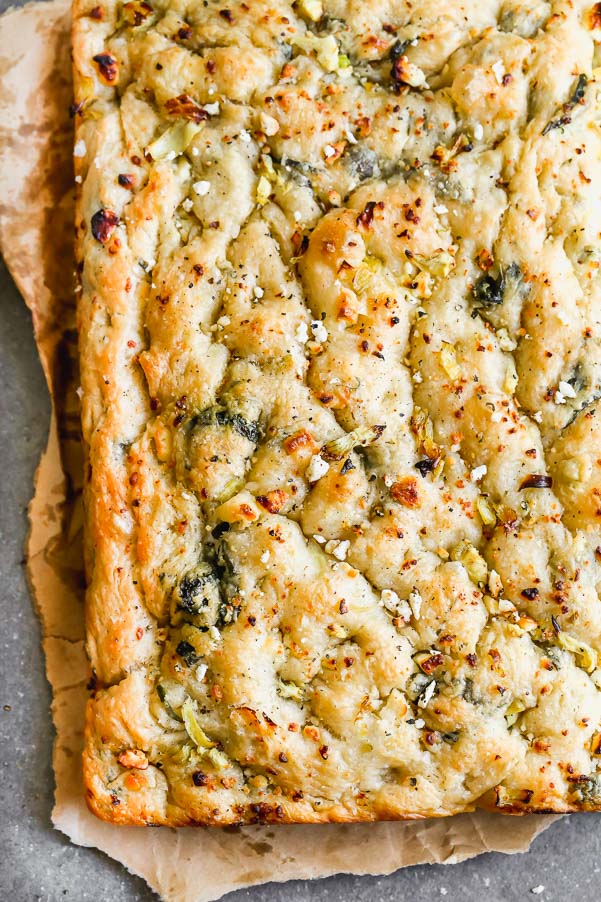 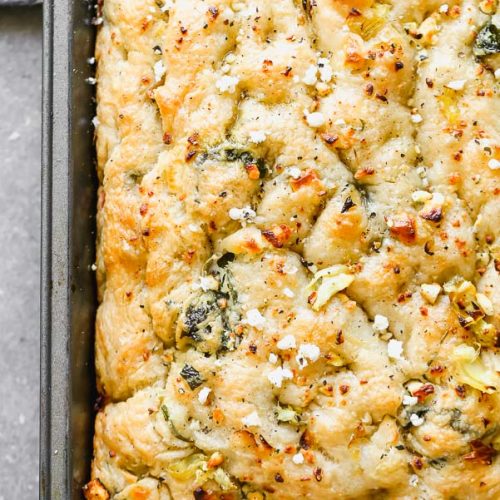